Backgammon playing pieces are known variously as checkers, draughts, stones, men, counters, pawns, discs, pips or chips.
The objective is to remove (bear off) all of one's own checkers from the board before one's opponent can do the same. The checkers are scattered at first and may be blocked or hit by the opponent. As the playing time for each individual game is short, it is often played in matches, where victory is awarded to the first player to reach a certain number of points.

Each side of the board has a track of 12 long triangles, called points. The points are considered to be connected across one edge of the board, forming a continuous track in the shape of a horseshoe, and are numbered from 1 to 24. Players begin with two checkers on their 24-point, three checkers on their 8-point, and five checkers each on their 13-point and their 6-point. The two players move their checkers in opposing directions, from the 24-point towards the 1-point.
Points 1 through 6 are called the home board or inner board, and points 7 through 12 are called the outer board. The 7-point is referred to as the bar point, and the 13-point as the midpoint. 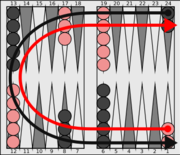 Video of a game of backgammon, showing movement around the board, entering from the bar, formation of primes, use of the doubling cube and bearing off
To start the game, each player rolls one die, and the player with the higher number moves first using both the numbers shown. If the players roll the same number, they must roll again as the first move can not be a doublet. Both dice must land completely flat on the right hand side of the gameboard. The players then alternate turns, rolling two dice at the beginning of each turn.
After rolling the dice players must, if possible, move their checkers according to the number of pips shown on each die. For example, if the player rolls a 6 and a 3 (notated as "6-3"), that player must move one checker six points forward, and another or the same checker three points forward. The same checker may be moved twice as long as the two moves are distinct: six and then three, or three and then six. If a player rolls two of the same number, called doubles, that player must play each die twice. For example, upon rolling a 5-5 that player may move up to four separate checkers forward five spaces each. For any roll, if a player can move both dice, that player is compelled to do so. If players cannot move either die in a roll, given the position of their checkers, then that turn is over and the turn passes to the opponent. If either one die or the other but not both can be moved, the higher must be used. When removing checkers from the board ("bearing off"), the exact roll must be used unless a die is greater than any checker can use to bear off; in that case the die is played by taking a checker from the highest-numbered point off the board. If one die is unable to be moved, but such a move is made possible by the moving of the other die, that move is compulsory.
In the course of a move, a checker may land on any point that is unoccupied or is occupied only by a player's own checkers. It may also land on a point occupied by exactly one opposing checker, or "blot". In this case, the blot has been hit, and is placed in the middle of the board on the bar that divides the two sides of the playing surface. A checker may never land on a point occupied by two or more opposing checkers; thus, no point is ever occupied by checkers from both players simultaneously.
Checkers placed on the bar re-enter the game through the opponent's home board. A roll of 2 allows the checker to enter on the 23-point, a roll of 3 on the 22-point, and so forth. A player may not move any other checkers until all checkers on the bar belonging to that player have re-entered the game.
When all of a player's checkers are in that player's home board, that player may start removing them; this is called bearing off. A roll of 1 may be used to bear off a checker from the 1-point, a 2 from the 2-point, and so on. A die may not be used to bear off checkers from a lower-numbered point unless there are no checkers on any higher points. For example if a player rolls a 6 and a 5, but has no checkers on the 6-point, though 2 checkers remain on the 5-point, then the 6 and the 5 must be used to bear off the 2 checkers from the 5-point. When bearing off, a player may also move a lower die roll before the higher even if that means 'the full value of the higher die' is not fully utilized. For example, if a player has exactly 1 checker remaining on the 6-point, and rolls a 6 and a 1, the player may move the 6-point checker 1 place to the 5-point with the lower die roll of 1, and then bear that checker off the 5-point using the die roll of 6; this is sometimes useful tactically.
If one player has not borne off any checkers by the time that player's opponent has borne off all fifteen, then the player has lost a gammon, which counts for double a normal loss. If the losing player has not borne off any checkers and still has checkers on the bar or in the opponent's home board, then the player has lost a backgammon, which counts for triple a normal loss. 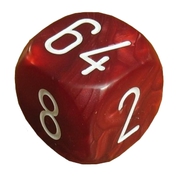 To speed up match play and to provide an added dimension for strategy, a doubling cube is usually used. The doubling cube is not a die to be rolled but rather a marker, in the form of a cube with the numbers 2, 4, 8, 16, 32, and 64 inscribed on its sides, denoting the current stake. At the start of each game, the doubling cube is placed on the bar with the number 64 showing; the cube is then said to be "centered, on 1". When the cube is centered, the player about to roll may propose that the game be played for twice the current stakes. His opponent must either accept ("take") the doubled stakes or resign ("drop") the game immediately. If the opponent takes, the cube, now showing the doubled stake, is moved to the opponent's side of the board. This is done to indicate that the right to re-double belongs exclusively to the player who last accepted a double. Whenever a player accepts doubled stakes, the cube is placed on his side of the board with the corresponding power of two facing upward. If the opponent drops the doubled stakes, he loses the game at the current value of the doubling cube. For instance, if the cube showed the number 2 and a player wanted to redouble the stakes to put it at 4, the opponent choosing to drop the redouble would lose two, or twice the original stake.
The game is rarely redoubled beyond four times the original stake, but there is no limit on the number of redoubles. Although 64 is the highest number depicted on the doubling cube, the stakes may rise to 128, 256, and so on. In money games, a player is often permitted to "beaver" when offered the cube, doubling the value of the game again, while retaining possession of the cube.
A variant of the doubling cube "beaver" is the "raccoon." Players who doubled their opponent, seeing the opponent beaver the cube, may in turn then double the stakes once again ("raccoon") as part of that cube phase before any dice are rolled. The opponent retains the doubling cube. E.g. White doubles Black to 2 points, Black accepts then beavers the cube to 4 points; White, confident of a win, raccoons the cube to 8 points, whilst Black retains the cube. Such a move adds greatly to the risk of having to face the doubling cube coming back at 8 times its original value when first doubling the opponent (offered at 2 points, counter offered at 16 points) should the luck of the dice change.
Some players may opt to invoke The Murphy rule or the "automatic double rule." If both opponents roll the same opening number, the doubling cube is incremented on each occasion yet remains in the middle of the board, available to either player. The Murphy rule may be invoked with a maximum number of automatic doubles allowed and that limit is agreed to prior to a game or match commencing. When a player decides to double the opponent, the value is then a double of whatever face value is shown (e.g. if two automatic doubles have occurred putting the cube up to 4, the first in-game double will be for 8 points). The Murphy rule is not an official rule in backgammon and is rarely, if ever, seen in use at officially sanctioned tournaments.
The Jacoby rule, named after Oswald Jacoby, allows gammons and backgammons to count for their respective double and triple values only if the cube has already been offered and accepted. This encourages a player with a large lead to double, possibly ending the game, rather than to play it to conclusion hoping for a gammon or backgammon. The Jacoby rule is widely used in money play but is not used in match play.
The Crawford rule, named after John R. Crawford, is designed to make match play more equitable for the player in the lead. If a player is one point away from winning a match, that player's opponent will always want to double as early as possible in order to catch up. Whether the game is worth one point or two, the trailing player must win to continue the match. To balance the situation, the Crawford rule requires that when a player first reaches a score one point short of winning, neither player may use the doubling cube for the following game, called the Crawford game. After the Crawford game, normal use of the doubling cube resumes. The Crawford rule is routinely used in tournament match play. It is possible for a Crawford game never to occur in a match.
If the Crawford rule is in effect, then another option is the Holland rule, which stipulates that after the Crawford game, a player cannot double until after at least two rolls have been played by each side. It was common in tournament play in the 1980s but is now rarely used.