As one of Playluggage distinguished features is its graphic design then we would like to present you Luix who is the author of some of our most exaiting graphics:

He specializes mainly in illustrations, album covers and making tattoos. His graphic designs have received numerous design awards, but he is especially proud of his album cover designs for the best metal bands.

His style is a mixture of many different influences. The keywords are: “surrealism”, “cartoon” and “tattoo”.

Inspiration can come from anywhere. There are some great role models who have inspired Luix, Günther Reindorff and M.C. Escher amongst others. Lots of inspiration also comes from books.

For Luix, to be bold means to have the courage to think beyond the boundaries. Dare to do things that just encourage the people themselves. One can never think of failure, because many things are left undone si 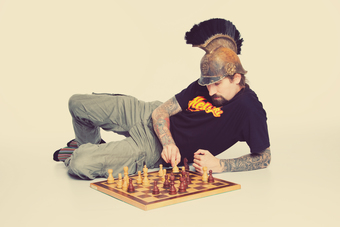 If Luix could be a superhero, then he would be a modern day Robin Hood, who would share the money of the rich with the poor (artists), so that they can implement their ideas.

His works can be found in record shops, on the Internet or in the form of tattoos on the beaches in summer and now also on Playluggage suitcases at the world’s largest airports, train stations and ports. But Luix hopes that his work would be published anywhere where art can be exhibited. Additional information about Luix can be found at www.luix.com.

Some of the examples of his work: